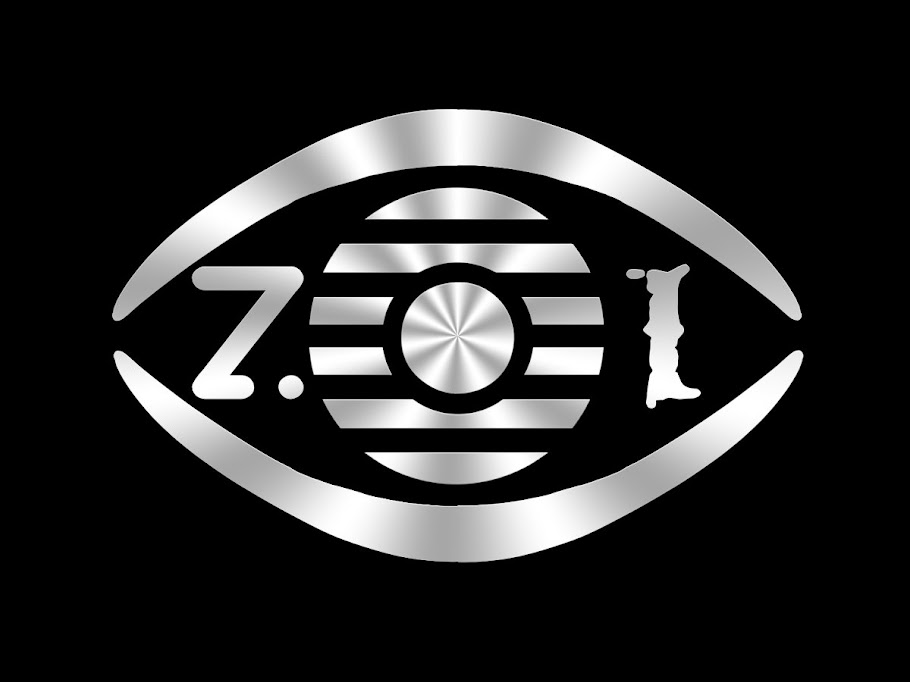 Hey folks, today we’re back with a review of the brand new Sourcebook Tamar Rising for Battletech. This is the first of the Sourcebooks for the new IllClan Era, (if you want to check our review of that book, you can find it over here) and it focuses on the Interstellar map around the Jade Falcon Occupation Zone and the Lyran Commonwealth. Things start off with a bang, and they really don’t let up from that opening salvo. Let’s dig in, talk about what’s in this book, and what you’re going to need to turn it into something you can play games with. (Editor’s Note: My Girlfriend was nice enough to get this for me for my birthday, and i am very pleased with this present, 5 star GF experience) 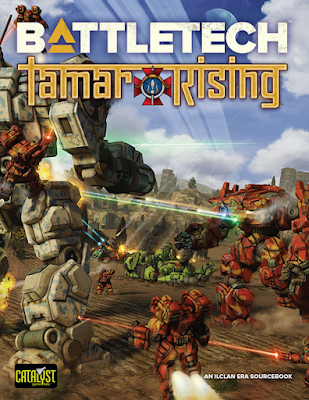 The Story So Far…

The Jade Falcon clan’s Warrior Caste has emptied out of their occupation to a battle for control of Terra, leaving behind small units of paramilitary police, sibko cadets, and solahma warriors to control their territory. They are a wreck of their martial power.

The Lyran Commonwealth has suffered from mismanagement in the previous decades, and the current Archon, Trillian Steiner-Davion, is on the brink of being unable to hold her realm together. Internal descent from her nobles, the predations of the Free Worlds League, and the ever present threat of the Jade Falcons have reduced her ability to act as she would like to quell internal rebellion and fend off external threats.

The Hell’s Horses, snubbed by their exclusion from the IllClan trial, seek to show their martial capabilities on the battlefield. Many targets wander into their crosshairs before they make a decisive campaign against their former neighbors.

The Here and Now

In this landscape, there is a great deal of danger, but there are also opportunities for those willing to take risks. This entire book covers 3151-3152 in what used to be the Jade Falcon Occupation Zone. New Powers spring up, old ones re-emerge and there’s many people playing a great big game of chess on a giant board. We will not dive into every power that springs up (Because you should go buy the book and read it yourselves) but some highlights include.

And a host of other folks willing to gamble on themselves for a massive payout.

There’s a lot of spinning plates in the air right now, and there are a lot of hot spots a play group could find to jump into for any of battletech’s game systems. That’s a fantastic thing, and I am very much a fan of the scale of this book.

Something that Battletech does very well is small stories: One company of Mercs on a mission behind enemy lines, One Trinary of Clan Warriors trialing for control over a world. These stories are contextually small (Realistically these are units so small that they rarely get mentioned by name in the sourcebooks) but the ramifications of their actions can reshape the interstellar map, especially in this IllClan era.

Military forces are returning to pre-republic sizes. However, the ability to deploy massive formations is hampered by the communication failure of the HPG Network, and reduced transport availability. Often, forces on world will decide the battle, and the decisions their commanders make shape those battles. This is the perfect environment for Battletech (Total Warfare, Alpha Strike, A Time of War, or Destiny).

The book gives us enough details to paint up forces, (always a plus for a miniature wargamer), put together lances and companies, and it even has a campaign reference (including Random Assignment Tables) for playing through battles in this region. There is a lot to enjoy about this book, but there are some weaknesses in the follow through on this one.

The RATs are always hard because they run by faction and weight class (they include vehicles, Fighters, 'Mechs, and Battle Armor). The main point (and this is a minor point, I will admit) of my issue is the RATs have units on them I have never heard of (and had to look up) and I have been playing for close to 35 years. A new player (and this book is actually fantastic for new players) is going to spend time tracking down those units and trying to figure out how they play.

The other “major” issue I have with this book (and again, this is minor) is that all the actual campaign mechanics are references to either Campaign Operations or another book in the Battletech Family. Again, for new folks just starting out with a starter set or a Clan Invasion box, there are a lot of missing parts to get them started. In the hands of a group who has access to those resources, and someone willing to do all that math, the campaign is playable.

Those two issues aside, this book is a fantastic start to the IllClan Era. One thing that I liked very much was the fact that there are no clear cut “Villains.” There are some bad people (and most of them run into problems of their own making), but the people that are building nations are people who believe in their individual causes and are doing the best they can to take care of the people and the worlds they control.

If this indicates the quality of the forthcoming Empire Alone, and further books in this line, I will reiterate what I said with IllClan. Everything Old is New Again, and everything is fun. That’s it for us today, if you like what we do, you can buy us a Ko-Fi here. Share this with your friends, your coworkers, people you want to play Battletech with.

Rating: 8.5/10  This book is a solid purchase for the new IllClan era, and will give you a lot of scenarios and situations to play through with your friends. There are going to be additional books you need to get the most bang for this buck. Plan accordingly.

You can find Tamar Rising at your FLGS (Hopefully, and if not, you can ask them about it) or if you don’t have one of those close at hand, you can always use the Catalyst Game Labs store here

Posted by Zardoz the Magnificent at 12:00 PM No comments:

The Problem with the Clans

Hey Game Fam, this is an article about Battletech, but it isn’t a product review. It’s more of an essay on where the Clans are, and what they represent in Battletech. Note, this is my opinion, but I have supporting facts taken from a variety of sourcebooks. The Clans are a problematic topic, (although they have one caveat that I think is interesting) for a host of reasons. Let’s dig into those problems point by point. If you’re unfamiliar with the Clans, check out their article on Sarna.net here. 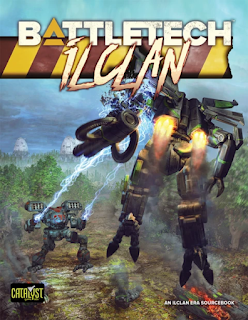 Read more »
Posted by Zardoz the Magnificent at 9:25 AM No comments:

The 1st Battle of Emporia (Battletech)

Hey Game Fam, today I’m going to look at something dear to my heart, Battletech. I love this game and want to see it flourish. This is a first idea for an introductory campaign for Battletech. This assumes you're familiar with the core rules of the game using either the BattleMech Manual/Total Warfare system or the Alpha Strike: Commander’s Edition. Let’s dive into the campaign’s mechanics.

Read more »
Posted by Zardoz the Magnificent at 11:20 AM No comments: 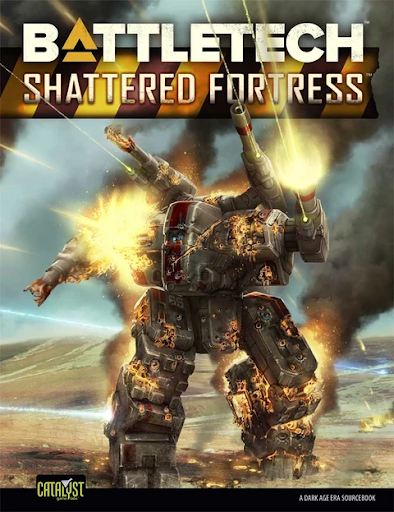 Read more »
Posted by Zardoz the Magnificent at 12:00 PM No comments:

Hey Game Fam, everything old is new again, and that feels like a very appropriate attitude for this article. Today I’m going to talk about the IlClan book for Catalyst Game Labs’s Battletech. I have a long history and love for Battletech, and I did back the Kickstarter for their Clan Invasion Boxed set. I have reviewed the first wave of those over on my YouTube, and I will review the second Wave stuff in the coming months. That, however, is not today’s key event. Today we’re going to talk about IlClan and what it means for Battletech and the game’s next steps. 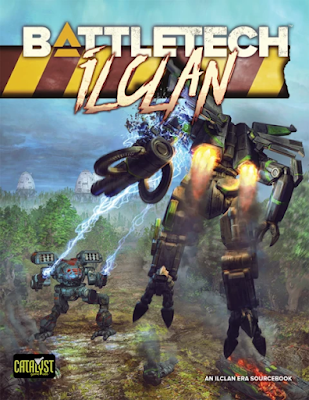 Read more »
Posted by Zardoz the Magnificent at 12:00 PM No comments:

Hey Game Fam, we’re back with week three of our Mega Dungeon Dev Blog. If you’re new here, thank you for stopping by however you got here. If you’re a little confused, that’s ok. Check back to the start of these articles here and you can catch back up. For the quick review, we’re working on filling out more of the dungeon and seeing what else this beehive needs. To see what the dungeon looks like when we start, here’s a link to the map over at Inkarnate, and we’re going to dive right in.

Read more »
Posted by Zardoz the Magnificent at 12:30 PM No comments:

Read more »
Posted by Zardoz the Magnificent at 12:30 PM No comments:

Con Panels and Such

Other Things i work on/Write

Check back for updates here and again

Our Youtube Channel is up and running (Slowly) at
https://www.youtube.com/channel/UCEEkksevvmdWt35ODaZMZtA

Zardoz the Magnificent
Trained as a school psychologist, i look at the overlap between education, psychology and games with the direction to utilize the latter two components to improve the first.